In January 2006, The Port introduced a new extension of the outdoor area and a two-berth ro-ro quay the other side of which was equipped for liquid and bulk shipments. Finnlink and the ferry traffic to Åland islands were now able to operate in the same field area. When the field area was expanded, the quarried rock was used for building the underwater foundation for the quay.

The traffic volume in the Port had increased year by year, and to improve the smooth flow of traffic the City of Naantali started to construct the new Satamatie road and a graded intersection in Vanto. Minister of Transport Anu Vehviläinen inaugurated the new road and intersection on 23 October 2007. Traffic began to flow via the Vanto graded intersection and the Luolala industrial district to the Port. 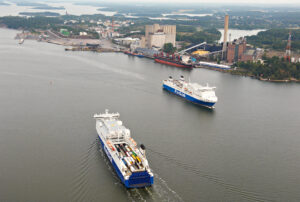 Finnlines´s vessels in the port of Naantali.

In 2007, the passenger volume on the Naantali–Kapellskär route increased by 23 per cent, and the number of trucks by nearly 13 per cent on the previous year. 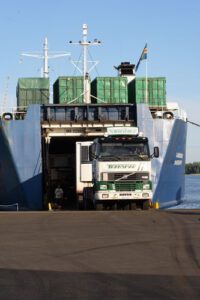