On the dark October night in 1958, a tremor was felt everywhere in Naantali. A tanker berthed in the Naantali oil refinery exploded. The ship’s tween-deck made of iron rose up and the ship tilted to its side. The tanker sank to the bottom in ten minutes. The major fire alarm brought in several fire brigades that fought at the fire site until midnight. The saved sailors walked around in shock, and it was difficult to determine the number of victims. The pressure wave caused by the explosion killed three people. Fortunately most of the ship’s crew of 40 had just left for their short free time.

The vessel was Neste Oy’s flagship M/T Tupavuori. The 160 metres long vessel had been built in Holland in 1954. When completed, Tupavuori was the biggest vessel of Finland’s merchant fleet. 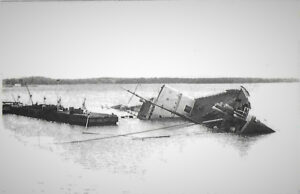 The tanker sank to the bottom in ten minutes.

M/T is an abbreviation of a vessel type and stands for Motor Tanker.

The operations of the Naantali oil refinery had started when oil tanker Tupavuori had arrived from Novorossiysk, Soviet Union with a full load of oil in Naantali on 26 June 1957. Now the company’s finest and just three years old vessel lay wrecked at the bottom of the sea. Oil had been emptied from the ship’s tanks before the explosion. The accident was probably caused when the tanks were washed with hot water. The hot water had caused easily exploding hydrocarbon gases from the crude oil remaining at the bottom of the tanks to evaporate. Gases were removed by blowing dry replacement air in the tanks, and the tank hatches on the deck were open at the time. A spark from the exhaust pipe of an auxiliary machine ignited the gases and caused the devastating explosion. Measures for raising the vessel were started after the explosion. Finnish and Swedish scuba-divers risked their lives while welding steel plates to repair the vessel’s right side that had been torn open by the explosion. Thanks to the work of divers, the tilted ship was successfully raised. The ship was then taken to be scrapped.