In 1986, The Port of Naantali had around one thousand metres of quays and a new 13-metre deep fairway which was inaugurated on 27 October 1986. The new fairway allowed for cargoes of up to 65,000 tonnes. The fairway was first used with festive flags by Neste’s new tanker Palva that brought Soviet oil from Ventspils to Naantali.

Hundreds of prestigious invited guests were present in the inauguration. The welcome speech was given by Mikko Rönnholm, Member of Parliament from Naantali and the chairman of the fairway committee. 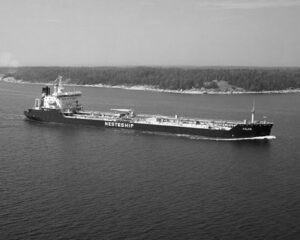 In 1987, Naantali is the third most profitable port in Finland after Helsinki and Hanko. Return on capital employed stood at 20 per cent. The corresponding figure in the Port of Turku was 3.1 per cent.