The construction of rock shelter for the State’s fuel depot (currently Neste) started in Tupavuori in summer 1944. The first two underground rock cavities were completed in 1946 and the next five by 1948. Oil shipments to Naantali commenced. An oil tanker arrived in the emergency supply store approximately once a month.

Started in 1957, the construction of the Neste oil refinery and oil harbour marked the beginning of large-scale port operations in Naantali. A sugar plant of Oy Juurikassokeri and a sawmill of Naantalin Saha Oy had operated in the area already earlier. State Granary (currently Suomen Viljava), power plant of Imatran Voima (currently Turun Seudun Energiantuotanto, TSE), and Mobil Oil (currently Exxon Mobil) also relocated in the port area. Large industrial companies contributed to the unprecedented financial flourish of the Port of Naantali and the City of Naantali. When big industry relocated in Naantali, the volume of port traffic rose to figures that put Naantali at the top of import harbours in Finland in the second place after Helsinki in terms of total traffic volume.

The actual operations of the Port of Naantali started in 1957. 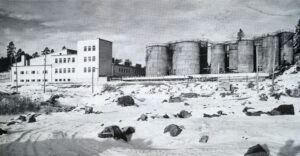