The Port of Naantali has secured the finances and well-being of the resident of the city for decades by generating income corresponding to approximately three percentage points of municipal tax.

The Port has opened a pleasant and fast route to Sweden and further to Europe for the efficient transports and passengers.

The Port has brought diverse business operations to Naantali which has in turn generated a large number of jobs and many activities in the city.

The biggest, best and number one in the Port of Naantali

The biggest ship built in Finland up to then was delivered from Navire Yard’s shipyard in Naantali in 1976.

The world’s oldest merchant ship in service, m/s Mailand carried gravel from Nagu and Pargas to Naantali in the early 1980s. The vessel was built in 1856 and had never run aground up to then.

The biggest granary in the Nordic countries was completed in Naantali at the turn of 1982 and 1983.

The biggest cargo shipment arriving in Naantali up to then was carried in the cargo hold of a vessel called Robert Stove that sailed under the Philippines flag. 61,600 tonnes of Columbian coal was shipped from Puerto Bolivar in October 1986.

Exxon Mobil Finland Oy’s lubricant plant in Naantali is the biggest plant in the Nordic countries that produces motor and gear system oil, ship oil and other oil for the industry.

Finnfeeds Finland Oy in the Port of Naantali is the world’s biggest producer of natural betaine which is used e.g. in the manufacture of cosmetics. 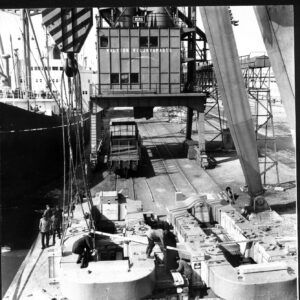