To salvage the Port’s profitable operations, tight and lively negotiations were held in 1996 on attracting new vessel traffic to Naantali.

A true jackpot was targeted in vessels traffic between Finland and Sweden, namely the transfer of the vessel traffic of Finnlines Oy’s subsidiary, shipping company Finnlink, from Uusikaupunki to Naantali. Finnlink Oy’s Managing Director Christer Backman came originally from Naantali, so maybe his love for the home city played some role.

It was  great when the negotiations bore fruit, and Mr Backman and Mr Kallio signed in November 1996 an agreement according to which three of the company’s cargo ships began to operate the route between Naantali and Kapellskär in 1997. Traffic was operated the year round, and the income generated for the Port amounted to ten million Finnish markka per year which was more than the income generated by Viking Line during its best years.

In the summer of the same year Finnlines announced having purchased two new cargo vessels for 800 million Finnish markka which would be placed to the Naantali–Kapellskär route in 1999. The new vessels were faster and could sail three voyages per day on the route. Finnlines challenged Silja Line’s and Viking Line’s cargo transport services. A new and hopeful era had again started in the Port of Naantali.

New port structures were of course needed for the new traffic. The cost of the new ramps required was around ten million Finnish markka. The Port’s net yield to the City, however, totalled around 25 million Finnish markka per year, so the investments could be covered within a reasonable time. The annual net yield corresponded to approximately three percentage points in municipal tax. 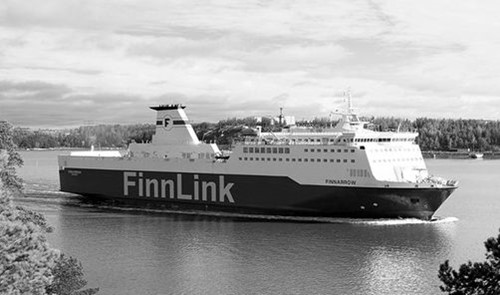 In a comparison of ports conducted by Taloustutkimus Oy the Port of Naantali climbed from the eighth place to the third best port in Finland. Only Pori and Turku were ranked higher.