The Port of Naantali was making grand plans and thinking of development projects. The City sold an area of over 35,000 square metres in Saharanta for 10 million Finnish markka to Naantalin Vapaasatama Oy on behalf of a company to be established. A new company called Naantalin Merikiinteistöt Oy was founded for the project. The area was named Meriterassi (sea terrace).

Commissioned by the City Board, consultant agency Naleko was planning in the area four blocks of flats that would accommodate office premises. The intention was to build in the sea terrace a 100 metres tall tower facing the city. In addition to offices it would include a water tower.

A Wonder World theme park was ideated to be placed in the port inside a huge glass palace that would have cost around seven billion Finnish markka. There were also plans for an equine sports centre, but a Scottish consultant would have charged 1.5 million Finnish markka for carrying out a feasibility study. An American style Mall with a water park was also proposed, costs around one billion Finnish markka. The boat marina and sea aquarium would have been placed inside Kuparivuori hill. And of course a hotel, congress centre and trap shooting range in addition to those. That would have provided a wide range of business operations for Vapaasatama whose principal owner was the City of Naantali.

The City started a big advertising campaign of one million euros to attract companies and create a thousand new jobs. The main items were the Saharanta district and the Luolala industrial district. A new port terminal was also being planned for the sea terrace in Saharanta.

The worst financial crisis in Finland’s history, however, discarded the big plans. 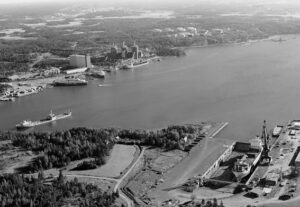 In 1990 Finland plunged into a recession during which GDP fell by 13 per cent and the unemployment rate rose to nearly 20 per cent.