The City of Naantali and Viking Line made an agreement in 1988 about new traffic arrangements in the port and starting traffic on giant ferries with at least two arrivals and departures a day. Naantalin Matkustajaterminaali Oy undertook to build new passenger bridges and corridors and a passenger car ramp for the 170 metres long vessels. Costs were estimated total a maximum of 25 million Finnish markka. The City of Naantali believed that it would regain the taxpayers’ money invested in the project, when the hopefully expected 900,000 tourists would arrive in the city on the ferries.

Rock was quarried, roads were built and an expensive bridge structure was set up for the new giant ferry. The quay was completed in 1989. The costs has increased to 30 million Finnish markka.

In summer 1989, traffic between Naantali and Stockholm was started by the new and gorgeous Viking Line’s m/s Isabella. In the same year, a new road connection was built from Turku to Naantali, and the Kuparivuori tunnel leading to Luonnonmaa was opened. To the disappointment of the inhabitants of Naantali Viking Line transferred Isabella to sail between Helsinki and Tallinn the following year, in August 1990. 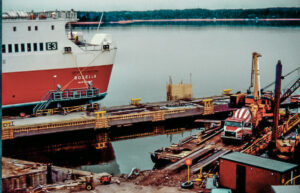 Photo: Port Control Mauri Palomäki. Rosella in the Port of Naantali in 1988. 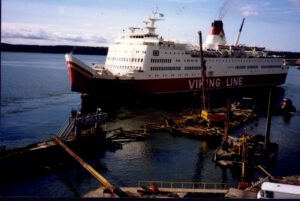 A crane toppled to the sea from the construction site of caisson quay in 1979.

A 200 meters long Greek vessel caught fire at the Navire shipyard in Luonnonmaa in 1984.

The storm in September 1986 pushed the 140 metres long Soviet cargo vessel Ljugov to IVO’s small boat marina in Tupalahti. A few leisure boats were damaged, and Ljugov got a hole in its hull. The vessel was on its way to the scrapping yard in Luonnonmaa.

In February 1988, one-third of Vapaasatama Oy’s warehouse of 1100 square metres collapsed to the sea, and with it 314 steel coils that weighed in total 1,750 tonnes and whose value was over 3 million Finnish markka.

In September 1990, a 100 metres long barge sank in the port area. It slid to the ship fairway while sinking. Divers went to check it and the barge was raised to the surface.

In March 2009, an oil slick was detected in the sea reaching from the port of Naantali to Åland islands. The oil was light fuel oil. The Port of Naantali area was restricted with oil booms and the Border Guard flew over the area. Fortunately the light fuel oil evaporated quickly from the surface, and no damage was caused to shores or birds.